Designed for those who want to remember experiences they've had or places they've gone in the past. Each kit includes content related to a certain theme to help jog the memory.

The Mother Goose Big Idea Kits are collections of activities, toys, stories, and related items to stimulate and educate children.

Book Club in a Bag

Does your library have a book club? Are you looking to start one? The Clinton-Essex-Franklin Library System can provide you with everything your book club needs for your next discussion!

CEFLS loans books exclusively for libraries and local book clubs to use for their discussions. Books are checked out in a sturdy canvas bag containing 12 paperback copies of each title and a printed list of discussion questions. Each bag is checked out as a single item with multiple pieces, so the person or institution checking out the bag is responsible for all pieces being returned. Library staff should count all pieces at check-in and check-out.

Book Club in a Bag kits can be checked out for six weeks, and they can be picked up and returned at any CEFLS member library. Please make sure books are returned together with the bag, not separately.

Book Club in a Bag sets cannot be requested via Horizon. If you'd like to request a title for your library's book club, contact David Fuller. Questions about the program or suggestions for future titles can be sent to Anja Bouchard.

Have a bare bulletin board? We have kits specifically designed to highlight topics without you having to do the work of buying materials or researching articles. Each kits includes various board-worthy items to help you.

Coding Kit : Dash - See it in the catalog by clicking here
Kids learn to code and have fun with Dash by giving voice commands and exploring loops, events, conditions, and sequences with the five free apps that come with the Dash Robot. The Dash robot offers an open-ended learning platform that makes tech knowledge simple and accessible, helping kids grow into confident creative architects. The xylophone attachment turns Dash into a one-robot marching band! Your child can compose songs or remix a sample song from the library while learning concepts like loops and sequencing - Amazon.

Coding Kit : Star Wars the Force kit - See it in the catalog by clicking here
Make a sensor and detect 3D hand motions. Learn how it works as you build and play with force powers – swing lightsabers, levitate the child (baby Yoda), force push Stormtroopers, pilot X-wings, make BB-8 fly, and more! Coding for kids has never been this simple, playful, and powerful. Recommended for ages 6+. - Amazon.

Empowering Girls : Code and Create - See it in the catalog by clicking here
Meet Brie, a video game developer, and Jade, a robotics engineer. They both love gaming, computers, and anything related to technology! Brie and Jade come with books and activities to help you learn about coding! Contains one bag, 3 books (Coding games in SCRATCH, Women in gaming, Get coding), 1 game developer doll with headphones, 1 robotics engineer doll with headset and glasses, a bag of accessories (includes a laptop, two tablets, a robot figure, and 4 game characters), 1 game (Code Master board game), 1 Ozobot Bit starter kit, 1 laminated sheet on Girls Who Code Clubs, and a laminated introduction/resource sheet.

Library staff are encouraged to use our dies to create attractive bulletin board displays, craft projects, and decorations. In addition to 3" letters of the alphabet, question marks, ampersands, parentheses, exclamation points, and numbers, we can cut the following:

* Indicates dies that can be used in combination with other dies.

It’s our hope that these kits will encourage girls to believe in themselves and their ability to achieve their goals. They have the power within themselves to do anything and be anything they choose!Each kit will contain an 18” doll, books, games, activities, and stories about women who have overcome obstacles and achieved success. Some of the kits highlight non-traditional careers for women.

Want to have an event outside of the library but don't want to fight with the elements? Or need a table and chairs that will work outside? Perhaps you just want to draw attention to and area, but don't have any extra funds to get something? We have equipment that can be lent for just such occasions.

Experience Kits are bundles with everything a group might need for a fun gathering with books, DVDs, games, activities, decorations, and more. Patrons can enjoy a night in with one of these available kits:

Our collections of flannel pieces that stick to a flannel board to enhance story times:

These kits focus on the 5 simple activities that strengthen early literacy skills for Kindergarten readiness - talking, writing, reading, playing, and singing. Each kit includes tips for parents and ideas for additional activities. 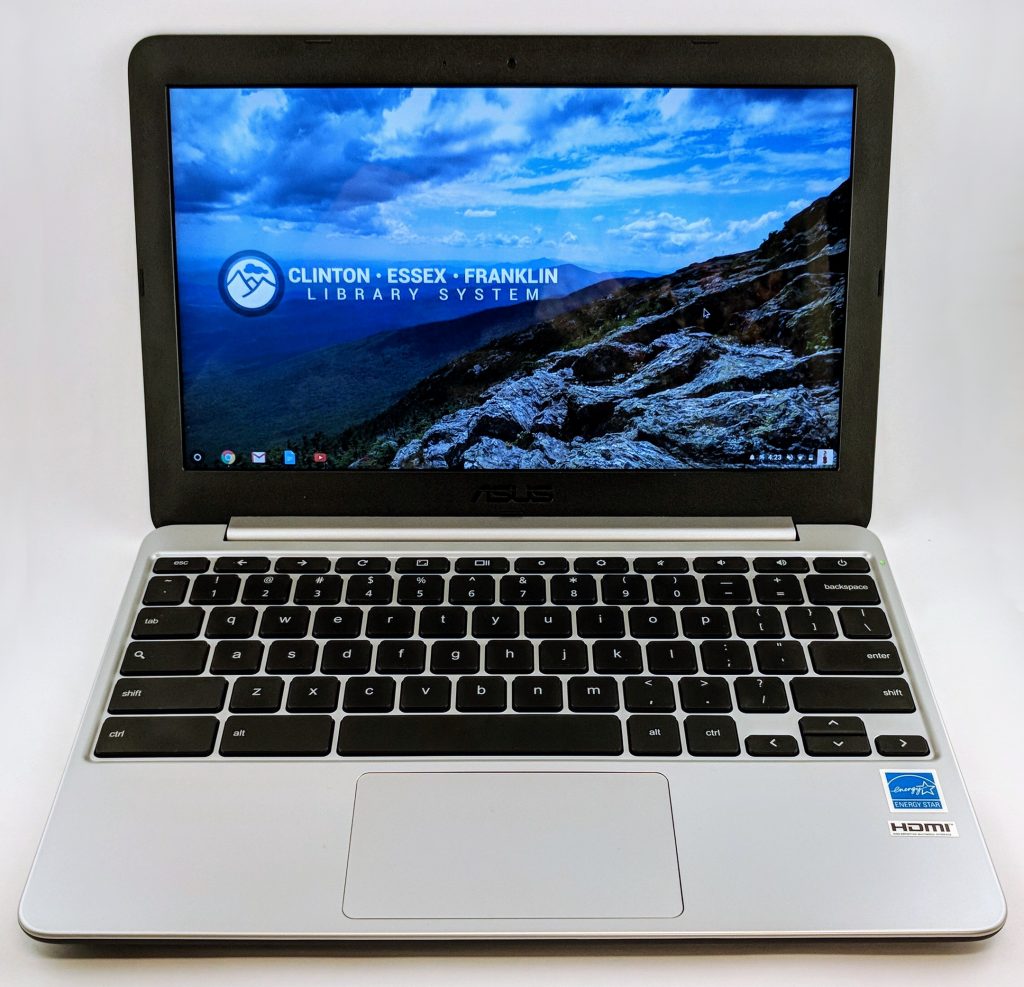 Want to have coding in the library or perhaps a job-searching workshop, but you don't want to tie up public access computers? We have a collection of Chromebook laptops available to use wherever they're needed. With a simple interface, easy wireless setup, and lightweight design, you can have up to 11 of these set up in any area.

Let's Make Music Kit: Blipblox - See it in the catalog by clicking here
The fully functional synthesizer for kids (and kids at heart!). This synthesizer beatbox is designed to promote creativity and audio exploration for children as young as 3 years old. While easy to use and safe for kids, the professional features provide a nearly endless ability to create new sounds. Learn the basics of synthesis by exploring new sounds or dig deeper to learn the signal path and master the synthesis engine using the online Learning Toolbox! - from container.

Let's Make Music Kit: Specdrums - See it in the catalog by clicking here
Sphero Specdrums are app-enabled music rings that make the world your instrument by turning colors into sounds. Tap on anything – your clothes, drawings, or the included playing pad – to create and mix sounds, beats, and loops that all play through the Kindle Fire Tablet included in the kit. All skill levels, from curious-minded kids to seasoned musicians, can create their own masterpieces with hundreds of instruments, loops, and sounds. Express your creativity and play music in a new, open-ended way with Specdrums.

Let's Make Music Kit: Ukulele - See it in the catalog by clicking here
Learn how to play the ukulele with this kit. It includes one ukulele by Rogue Fine Instruments and an instructional DVD to get you started!

Want to have a maker space or maker activities in your library but your budget can't cover it? Request a Maker Kit for your library or have a patron check it out themselves to partake in hands-on learning without the major cost.

Enjoy a 10% discount on general admission for up to 4 people when you check out a pass from a local library. Check for availability on our online catalog: Fort Ticonderoga Passes. Contact the library directly for more details.

Thanks to a Generous Acts grant from the Adirondack Foundation, all of our member libraries have at least one Discovery Pass to The Wild Center! These passes may be borrowed with your library card and they provide a discounted admission price of $10 per adult for up to two adults, and free admission for up to four youths, ages 5-17 (admission for young children ages 4 and under is always free). The pass provides at least a half-price discount for the adults! Be sure to make plans to check out this amazing local resource this summer. 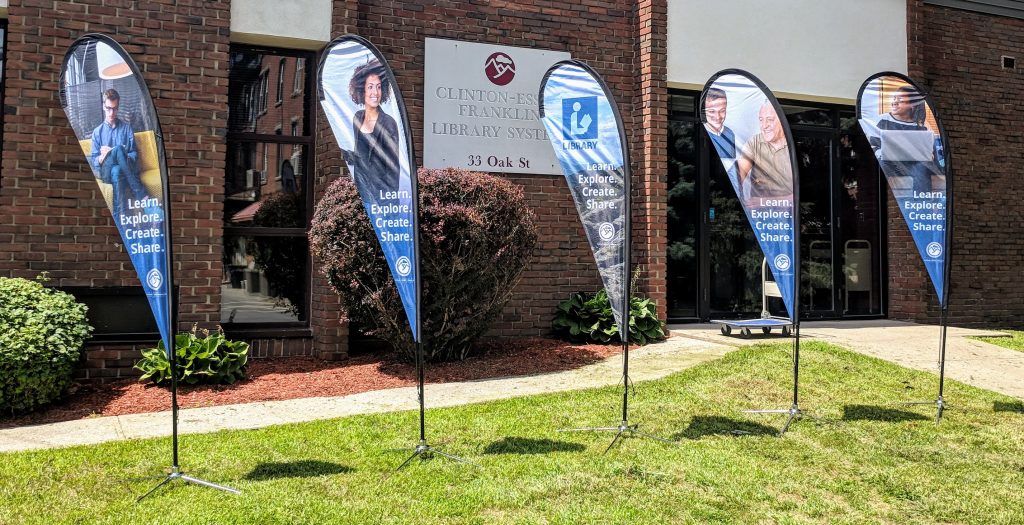 Ever feel like a good chunk of the population drives by without even looking at your building? We've got something to help with that. We've purchased five teardrop, double-sided signs that serve to highlight what kind of services and programs your library provides. Job searchers, students, people looking for a place to have a business meeting, seniors who need to learn about new technology, or just the average person who might not know about the library will notice these signs that stand higher than 7 feet tall. Each comes with a collapsible pole, folding base, and a water bag to weigh it down. The flags are easy to set up and have a sturdy design. 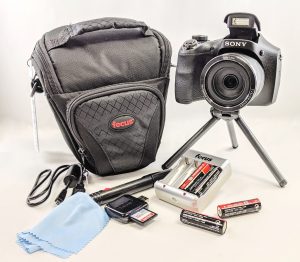 Ever wanted to try out photography but scoffed at the price of an entry-level camera? Well, you can see if this hobby is for you free of charge with this kit! Click here to find it in the catalog and reserve it today. It includes plenty of useful items to hone your skills: 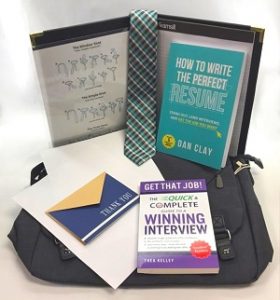 Put your best foot forward with our Prep for Success kit. Whether you need help with writing a resume, tips for job or college interviews, or just some accessories to make you feel professional and confident, this kit has you covered. It contains a messenger bag, a portfolio with note paper and a pen, resume paper, thank you cards, a guide on how to write a resume, a book on nailing an interview, and even a tie with instructions on how to wear it. Check out the kit free of charge.

Kits that include themed puppets and stuffed characters for story times:

Vinyl never really dies. That's why we've added a vinyl record player for you to check out, along with selections of records to play on it.

Kits compiled with generous grant funding from the Autism Alliance of Northeastern New York. These kits contain materials, activities, and objects specifically catered to those on the Autism spectrum and their parents, caregivers, and siblings. 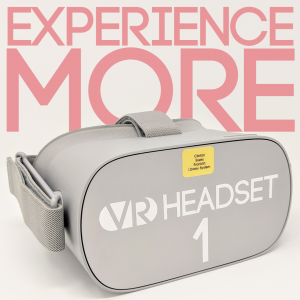 These standalone headsets don't require a computer or smartphone to run the dozens of apps packed on them. From diving underwater and swimming with rare aquatic life, to entering the human bloodstream and learning about different blood cells, to floating through the International Space Station to learn about what astronauts are working on, there's no limit to what you can experience in virtual reality. Patrons can request one today from our online catalog to pick it up from their local library.

What's a Wonderbook? A Wonderbook is a print book with a ready-to-play audiobook inside. Simply open, press play, and read along! Kids also have the ability to swap over to learning mode for literacy learning questions. Wonderbooks are a fun and interactive way to get kids reading! You can find them on the online catalog today.

The Schroon Lake Library is offering the Dot Mandala class again with an added twist. We will be learning the basic method and then making Christmas ornaments. Class size is limited so call the Library to register at (518) 532-7737 ext. 13.
… See MoreSee Less

This kit invites your little one to dream big by learning about many different role models and inspirational people! It includes 4 books, a matching game, and some coloring sheets. Request it at cefls.ent.sirsi.net/client/en_US/default/search/detailnonmodal/ent:$002f$002fSD_ILS$002f0$002fSD_…
… See MoreSee Less

This cuddly friend is sure to keep young readers e

Visit our Routes to Recovery website for local and

Do you have the music inside you? Find out with ou

Can't wait to see Mr. Ben at the front of the holi

Enjoy your holiday leftovers while browsing our co

Serving 30 public libraries and 3 reading centers (and their patrons) in Northeastern New York.

Visit our Routes to Recovery website for local and online resources for those needing services related to substance abuse as well as the professionals and loved ones providing support. https://buff.ly/3NOQflx
#cefls #library #libraries #addiction #recovery

Do you have the music inside you? Find out with our Let's Make Music kits! Borrow more than just books from our Library of Things: https://buff.ly/3fyR9CD
#cefls #libraries #library #LibraryofThings #LetsMakeMusic